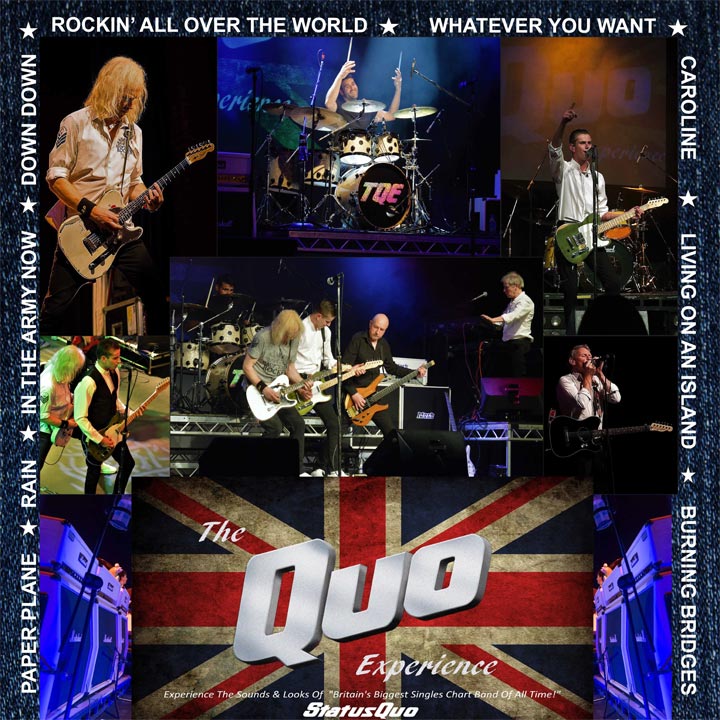 An excellent show, really capturing the essence of the Quo I played with for 13 odd years – the attention to detail was awesome!” MATT LETLEY – Status Quo drummer 2000-2013.

Rockin’ All Over The World – Whatever You Want – Down Down – Living On An Island – In The Army Now – What You’re Proposing – Burning Bridges… just a few of the many hits spreading five decades of Status Quo’s incredible music history.

‘The Quo Experience’ is an East Anglian based band including David Wood as ‘Francis Rossi’ and Dave Crawte as ‘Rick Parfitt’; both have spent years studying every detail of Rossi and Parfitt’s looks, playing styles and stage performances to make sure they are both as close to the real thing on stage as is possible, without actually being the legendary rock duo themselves! The magic and chemistry that the Parfitt/Rossi partnership brought to a Quo ‘live’ performance is now being continued within The Quo Experience.

However, The Quo Experience is not all about Rick and Francis; it also features Graham Partridge, who captures the magic of Status Quo’s long-term keyboard player Andy Bown’s playing and vocals perfectly; Ian ‘Jaspa’Woodthorpe, an excellent Matt Letley/Leon Cave style drummer and Del Fletcher, a very talented bassist and performer.

With such an impressive line-up of seriously experienced musicians and passionate Quo fans, along with a stage show that includes the legendary Status Quo wall of white Marshalls and replica guitars, The Quo Experience is fully armed to take the act as far as is possibly achievable in the tribute band industry. The Quo Experience is, however, not just another Quo tribute band – it is an ‘experience’; an ongoing chance to ‘experience’ the sounds and looks of “Britain’s biggest singles chart band of all time” as we all remember it!

This website uses cookies to improve your experience while you navigate through the website. Out of these, the cookies that are categorized as necessary are stored on your browser as they are essential for the working of basic functionalities of the website. We also use third-party cookies that help us analyze and understand how you use this website. These cookies will be stored in your browser only with your consent. You also have the option to opt-out of these cookies. But opting out of some of these cookies may affect your browsing experience.
Necessary Always Enabled

Any cookies that may not be particularly necessary for the website to function and is used specifically to collect user personal data via analytics, ads, other embedded contents are termed as non-necessary cookies. It is mandatory to procure user consent prior to running these cookies on your website.